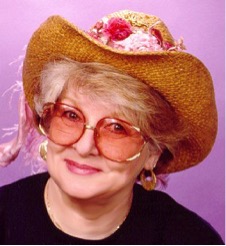 After a five year battle with cancer, Mimi passed peacefully at 2am on February 19, 2017. She is survived by her husband Jim, her brother Alan Jackson of Long Beach, Ca, her daughter Cathie Condon of New York City, three grandchildren and three great grandchildren including Cassi, 20, who lives with her and her husband in Fort Myers, FL. There will be no services, and her ashes will be scattered in the Atlantic Ocean, the Pacific Ocean, and the Gulf of Mexico.

In her death, as well as in her life, she would have wanted to contribute to the dollmaking world. In lieu of cards or flowers, please contribute to help Lisa Lichtenfels who is also battling cancer at: www.gofundme.com/inspirelisa or by contributing to the American Cancer Society.

And what Mimi would enjoy most, is for you to get together with your fellow dollmakers at your next convention or doll club meeting and have an ice cream social to commemorate her life.

Gloria J. “Mimi” Winer has been an original cloth doll artist since 1983. She has studied fine arts at the National Academy of Arts and Design, the School of Visual Arts, the New School/Parson’s School of Design, and with Pe Ling Liang of NYU. She studied sculpture at Monmouth College. She has studied dollmaking with NIADA artists Lisa Lichtenfels, Bob McKinley, Martha Armstrong Hand, Mr. George Stuart, Antoinette Cely, and many others.

Her work as a doll artist represents the leading edge of what can be done with her medium. She is constantly seeking out and testing new materials, has developed many new techniques and invented some exclusive tools. Gloria shares her information with the doll and craft world through her (retired) quarterly magazine, Let’s Talk About Dollmaking, columns and frequent articles in many Doll, Art and Craft magazines, her web site at Mimidolls.com, and through the books and patterns she writes with her husband and partner for more than 30 years. Among their publications are many instructional patterns and an in-depth study of the new clays, Mimi’s New Clays for Dollmaking.

Gloria’s doll patterns include lengthy step-by-step instructions so that even beginning dollmakers can successfully complete a doll. Effectively they are instructional books that allow many variations over and above the specific doll. They typify her outstanding ability as a teacher. She loves sharing her techniques and it shows in all her work. Gloria is in constant demand throughout the U.S.A, Canada and Australia to teach at conferences, seminars, and doll clubs.

Gloria Winer’s work has been well recognized by her peers. She received a special award for her contributions to cloth doll making from the National Cloth Doll Makers Association, and a Presidential Award from the National Institute of American Doll Artists (NIADA), and for her contributions to that organization. Most recently she received the First Award in Excellence for the significant contribution made in the development of the first Masters Magic and Apprentices Workshops held at Maroochydore, Australia in 2005.

Gloria’s prizes for her original dolls include a 1st and 2nd award in the Artist Division at the UFDC National Conference in 1994 and 1993, and 1st place in the 1994 competition at Dimensions in Cloth, an annual exhibit and competition for cloth dollmakers.

Gloria’s work has been part of Dollmaker’s Magic and The Figure in Cloth; shows that traveled throughout the United States to galleries and museums. Her work has also been on exhibit at the Wenham Museum, Wenham, MA, in two exhibits of Dolls of the 21st Century at the Springfield Museum, Springfield, OR, and by invitation at the Musée des arts décoratifs, Palais du Louvre, in Paris.

Gloria’s work has been featured in several books by her peers including: The Anatomy of a Doll by Susanna Oroyan, Mother Plays With Dolls, by elinor peace bailey, Cloth Dolls From Ancient to Modern, A Collector’s Guide with Values by Linda Edwards, and in numerous doll magazines.

Since 2004, Gloria has created and donated a yearly bear to the Broadway Bears Annual Auction, a part of the Broadway Cares, Equity Fights AIDS Foundation. This charity raises funds for Broadway theatrical employees suffering with AIDS and HIV by auctioning teddy bears dressed in recreations of original Broadway theater costumes.

Our thanks to all of you who have been so generous with your prayers and well wishes. We appreciate every one of you. Cassi and I hope to be able to publish three new Mimi patterns (Mimi’s Wee Folk – Elves, The High Priestess, and Spartacus) that are almost finished in the near future. We will also be re-issuing Pretty Faces and Victoria Rose as e-books in a few months.