Wee “Betty” Paulson, creator of Wee-Did-Its®, past president of NIADA, and member for over 20 years, died on April 6, 2004, in Las Vegas, Nevada

“A Weedidit® is an original scene inspired by a true to life experience. I use no patterns. All figures and animals are individually hand made, as well as all accessories, including miniatures, furniture, and landscapes. My basic art training was received at Iowa State University and the Minneapolis Art Institute. Over the years I have experimented in many media. In 1965 I began creating, in felt, little elves, angels and elfin children and placing them in happy settings. Because my childhood nickname was ‘Wee’ they became known as Weedidits®.”
Betty “Wee” Paulson

Wee, an internationally honored doll artist was born and raised in Boone, Iowa. She and her husband, Quentin Paulson, moved to Madison, Wisconsin, in 1956 to raise their three children, Heidi, Lisa, and John. She moved to Las Vegas in 1979. Her children knew her as an exceptional, well-loved mother and grandmother.

I first saw Wee and her work when I drove to a Plainfield, Wisconsin, doll show and sale, where she was selling her felt creations of children, depicting scenes of childhood. I was impressed, but too shy to talk with her about her work, except to say I loved them. I remember that I didn’t buy anything that day, but I have kept 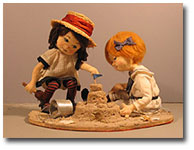 a picture of my introduction to her lively felt children in my mind to this day.

When later I was introduced to Wee, I felt an instant connection, and I have always considered her to be one of my dearest friends. She created many Weedidits ® for me that I will always treasure. One is of me, as a little four year old girl, carrying my Jane Withers doll, a bouquet of bleeding hearts, with our collie dog, Pal, mischievously standing beside me. I can almost hear him panting! When she created that funny little girl that I was, with long curls, homemade clothes, wearing dirty high-top shoes and striped gray knee socks, I think she saw exactly that hopeful, trusting look that a little girl often has. Wee could truly capture the essence of childhood. Another creation of Wee’s was for my daughter, Michelle, when she graduated from high school, which included her as a 6 year-old playing with two younger brothers. Wearing matching plaid shirts and pulling a red wagon, the scene is a wonderful depiction of child’s play. My daughter still has that work in her home. 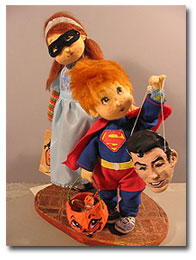 Wee was exceptional in her depictions of children, but she was also especially adept at creating the animals and other creatures that accompanied many of her scenes. She told me that because her husband was a veterinarian, she was aware of the bone structure of an animal, and was always determined to get it just right

Wee Paulson was known to be a devoted mother, a talented artist, and a great friend to many. While she was diminutive in size, she was large of heart, with great determination to live in the present moment. There was nothing like her hearty laugh to always spark a cheerful note. She was able to take charge, to make her presence felt in many ways. As president of NIADA, she helped the organization incorporate in Wisconsin. Her thoughts and concerns were always for the artist, the doll artist.

I think that the way she saw her work was that her heart led her hands, to re-create in her Weedidits® the joy of childhood, the celebration of innocence to be born in her many, many works of doll art. There were times when she was asked to create an adult figure, which she did. but it was not what she preferred to do. When Wee moved to Las Vegas, her work reflected the children she saw there.

At the end of Wee’s life, she was unafraid. She expressed great happiness at having had a wonderful life, “grateful for every minute of it.” Her unrelenting philosophy, through good times, rewarding times, and through many struggles and loss, was: “Don’t worry, be happy, let go and let God.”

By good friend of Wee Paulsen, Gloria Laundrie
Past member of NIADA, having served as Newsletter Chairman and Secretary In the 1970’s.